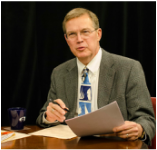 Rick Holm MD, of Brookings South Dakota, is a unique voice in the world of health care in the US. Over the past 10 years, Holm has emerged as a leader of health care education and communication, persuading dozens of doctors to volunteer hundreds of hours of time towards a deceptively simple, endlessly complex mission: to provide accurate healthcare information to the public; especially to people who often have limited access to healthcare professionals. A busy physician of internal medicine with a full workload, Dr. Holm is on the forefront of communication with the public on the myriad questions in American health care.

Dr. Holm is the host and medical editor of a weekly PBS television show called OnCall, and a weekly radio show, called OnCall Radio. He writes a weekly syndicated health care editorial column which appears in newspapers throughout the midwest, and is the founder and leader of the Hopeful Spirit Chorale, a weekly community singing group who performs for hospice patients and others who need a "hopeful spirit."

This doctor-teacher-philanthropist is the former Governor of the SD Chapter of the American College of Physicians (ACP). During his ACP Governorship, Dr. Holm also sat on the National ACP Health & Public Policy Committee, which represents over 130,000 internal medicine doctors across the nation and is responsible for writing policy and position papers that represent healthcare professionals and help protect the public’s right to affordable healthcare. As Dr. Holm recently put it: “It’s not if we should fix healthcare, it’s when.”

Dr. Holm was inducted into the South Dakota Hall of Fame in 2016.

Joanie Smith Holm was born and raised in Jacksonville, Florida. She met her South Dakotan husband, Rick Holm, while they were both in school in Atlanta, Georgia. She trained as a Registered Nurse in Georgia, and a Pediatric Nurse Practitioner in Virginia. Joanie and Rick have four grown children.

Joanie's role with Healing Words is varied. She assists with planning the season and assists on show night with viewers' calls. Joanie is also working to expanded pediatric care knowledge. She is the vice president of the Healing Words Foundations.

Lowell Haag directs On Call with the Prairie Doc. He works for the Yeager Media Center at South Dakota State University. Haag and directs the live TV program as well as performing pre- and post-production responsibilities.
More about Lowell

Jay Vanduch is the co-producer of On Call with the Prairie Doc and has been working with the program since its inception 25 years ago. He is contracted through TV Productions, Inc., a Brookings-based media production company.
More about Jay

Joan Marie (Ford) Hogan was born in Chicago, Illinois, and was the third oldest of seven children. Her parents are William J. Ford and Mary Elizabeth Courtney Ford. She attended Ascension Grade School in Oak Park, Ill., and Trinity High School in River Forest, Ill. She attended Saint Louis University where she met Ed. Later, Joan earned both the Bachelor of Science (1994) and the Master of Science (1997) degrees from South Dakota State University. Previous to her academic career, Joan owned and managed a group of shoe stores in Brookings and Mitchell. Joan was an instructor in SDSU’s Communication Studies and Theatre Department and produces Prairie Doc Radio.
More about Joan